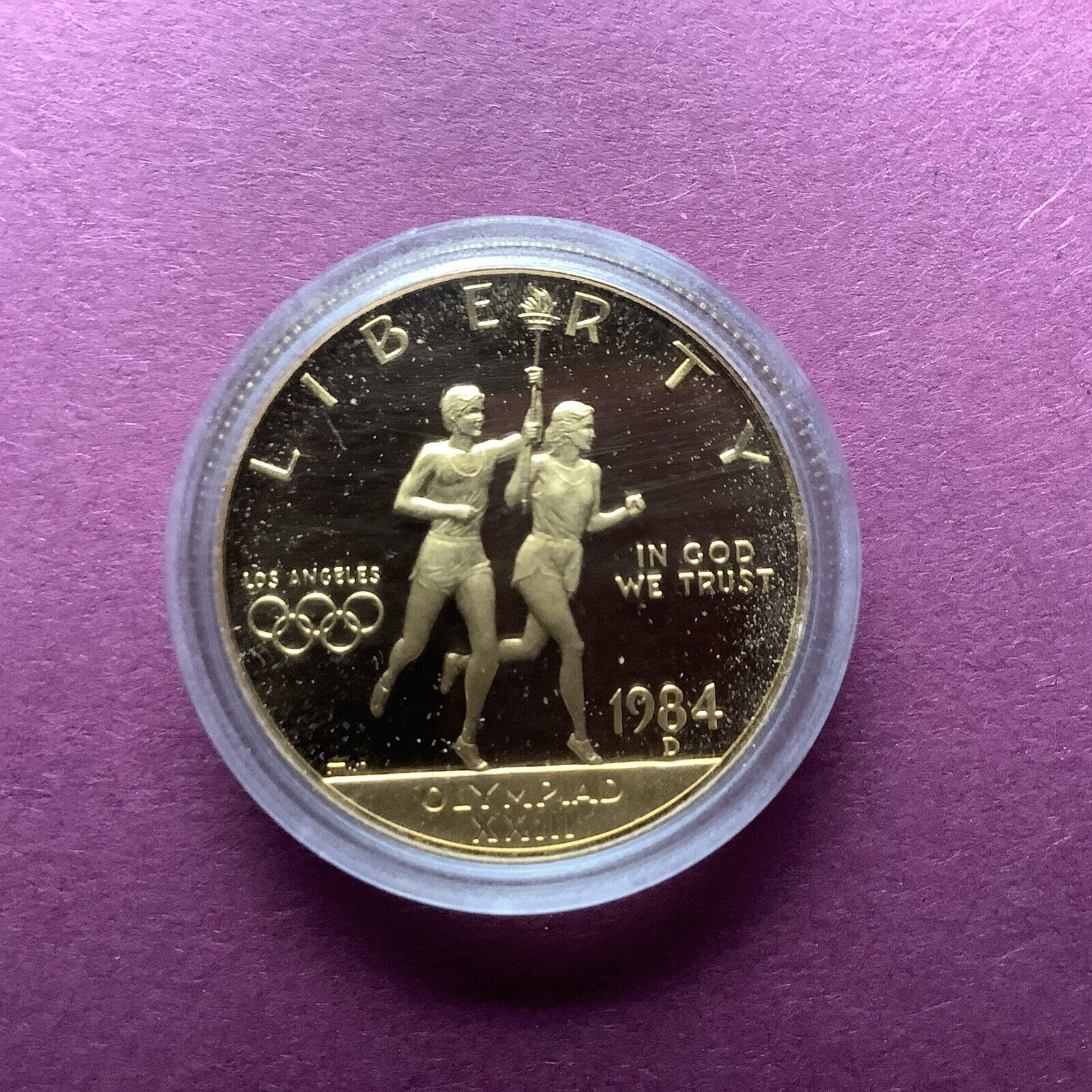 The success of the Washington Half Dollar program in 1982 eased the way for additional commemorative legislation, and the first of these new coins were issued for the 23rd Olympiad hosted by Los Angeles in 1984. The simplicity of the Washington program, however, was quickly overwhelmed by the grandiosity and greed that had ultimately brought about the suspension of commemorative coinage in 1954. That the concept of commemoratives could survive such abuses was a testament to the great desire of collectors to continue the series. The original plan was to coin proof and uncirculated editions of two silver dollar types in 1983 and 1984, respectively, plus a single type of gold eagle, or ten-dollar piece in 1984. This latter coin was particularly welcomed as the first gold coin to emanate from the U. S. Mint since 1933. While the Mint had been producing the American Arts series of commemorative gold bullion pieces since 1980, these were merely medals and lacked the cache accorded by the hobby to actual coins. The commercial sponsors of the Olympic coin bill, however, quickly saw dollar signs and began agitating for a long series of commemorative coins comparable to that issued by Canada for the 1976 Olympic Games in Montreal. Ignoring the fact that these coins had been poor performers in the aftermarket, Congress seemed poised to give in to such demands. Ultimately, a compromise was reached in which the two silver dollars would be coined at three different mints and the gold eagle at a single mint, making the eagle very attractive to prospective buyers. Before the ordering period ended, however, minting of the gold piece was extended to no less than four mints, a breach of faith that many collectors resented at the time. The silver dollar of 1983 was primarily the work of U. S. Mint Chief Engraver Elizabeth Jones. Known for some truly outstanding coins, this is one of her lesser efforts. It depicts on the obverse a discus thrower patterned after an ancient sculpture by the Greek artist Myron. Three staggered images of the athlete are used to simulate the effect of motion. In addition to the Olympic Games logo and the usual statutory inscriptions appear the date 1983, below it a letter identifying the place of minting, and at the bottom of the coin the initials of its designer, ‘EJ.’ The reverse of this coin shows the head and upper body of the American eagle in profile. The initials ‘EJ-JM’ behind the eagle’s neck are those of Jones and her collaborator, fellow U. S. Mint Engraver John Mercanti. This silver dollar was coined in uncirculated finish at the U. S. Mints in Philadelphia (‘P’ mintmark), Denver (‘D’) and San Francisco (‘S’). The latter also struck proofs. Philadelphia produced more of the uncirculated version than were necessary for the three-coin sets, and these extra pieces were earmarked for sale as single pieces for those not desiring the complete set. The biggest seller of all was the proof edition, and this pattern would hold true for all subsequent commemorative coin series. A similar minting spread was employed for the 1984 proof dollar, with three-coin sets of uncirculated pieces being offered alongside single ‘P’ Mint uncirculated coins and ‘S’ Mint proofs. Both sides of this coin were designed by sculptor Robert Graham, an individual not associated with the U. S. Mint. For the obverse Graham replicated his figural piece from the entrance to the Los Angeles Coliseum, site of the opening and closing ceremonies for these games and of certain other events. The date 1984 appears at the bottom on the coin, while the mintmark is placed on one of the Coliseum pathways. The reverse portrays a somewhat dovelike American eagle placed in a pose that reminded many collectors of the 1921-35 Peace Silver Dollar. The artist’s initials, ‘RG,’ appear to the left of the rocky crag upon which the eagle is perched. Collectors were highly critical of the coin’s obverse, with its headless male and female torsos. Nevertheless, sales of this dollar were comparable to those of the 1983 entry. As before, the proof edition vastly outsold the uncirculated coins. The gold eagle for the 23rd Olympiad was an eagerly anticipated coin, yet the publication of its design brought further disappointment. The obverse features two runners, one male and one female, carrying the Olympic torch, and the hobby quickly dubbed this tableau as “see Dick and Jane run.” The date of coining appears to the right of the runners, with the mintmark below. At the seven o’clock position appear the initials of John Mercanti (‘JM’), and James Peed (‘JP’), also of the Mint staff, who furnished the sketch from which Mercanti worked. The reverse of this coin seems to have been an afterthought, as Mercanti prepared just a simple rendering of the heraldic eagle seen many times before in American coinage. The initials ‘JM’ are placed prominently below it. Sales of the gold eagle were lower than for the silver coins, due to their high intrinsic value and resulting high issue price. The mints at Philadelphia, Denver and San Francisco produced roughly similar numbers of these coins in proof format, though the latter made some extras for single-piece sales.